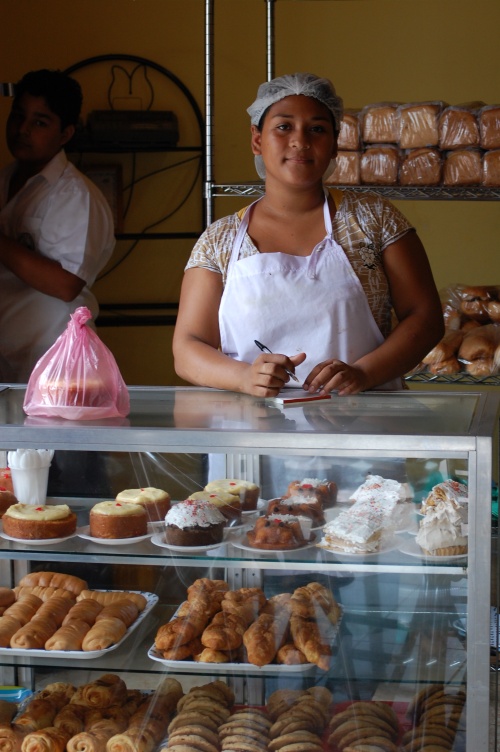 A baker in Leon.

When I’m on the bus, in the street, in a café, I find myself observing the movements of the people around me, thinking about how much everyday gestures reveal.  Here they’re filled with grace, a simplicity and ease of movement.

Bicycles, taxis, and pedestrians navigate the streets of the cities in fluid motion, sometimes beeping but rarely moving to anger or aggression, seeking ways around each other.

Even the cows by the side of the road move with a certain grace, unhurried by cars, trucks or bicycles, pacing across the pavement in slow motion, pausing to low only if surprised, their faces relaxed, and then returning to their cud.

On the bus the ayudante, the person who collects the money and loads cargo, fluidly moves in and out of the open door, sometimes running to reach the door as the driver is pulling away, sometimes climbing to the roof to attach a bike or tarp, pulling himself up the ladder, then climbing down and dropping lightly to his feet.

On a crowded bus in León, I sat next to my friend Claudia as more and more people boarded and stood in the aisle.  A woman and her 2 year-old son held on to the pole in front of us, and Claudia reached down to the child and gently pulled him to her lap, his mother smiling in acknowledgement even though they didn’t know each other.  The boy rode contentedly for 15 minutes. Another day, on an even more packed bus, a mother and son squeezed onto the steps of the bus, and a man in the front seat offered his lap to the boy.

Enjoying the afternoon on the front porch in Miraflor.

There’s grace in the greetings people offer each other—a handshake between men or new acquaintances and a kiss on the cheek for women.  In the campo, the countryside, people make eye contact when they pass and offer an, “¡Adios!”

Within families the greetings are more intimate.  Maykal, the 15 year-old in my host family, clasps his hands as if in prayer when he sees his grandfather and says, “Abuelito.”  15 month-old Esteffany, the newest member of the family, clasps her hands together when she greets someone, and even “salutes” me.  The parents in the family are now elders themselves, yet they still greet their parents with clasped hands.

Children are taught to give the saludo to elders—I’ve seen parents move the hands of young babies when their grandparents enter the room, imprinting the pattern.  It’s a gesture that strikes me for its simplicity and sincerity.